As the rules begin to slowly coalesce, I can create the stat tables to better communicate some of these changes. 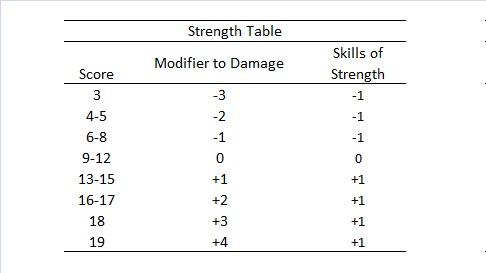 Pretty straight forward here for Strength. As mentioned before, the bonuses for to hit and damage have been split up. Each attribute will also modify applicable skills. In this case, Strength affects Climbing. This would also modify actions like breaking down doors, which can be rolled into this universal skill mechanic.

Nothing here that requires extra explanation. Remember, I am using a pseudo-3e save system with 3 saves, based on Dex, Con, and Wis. 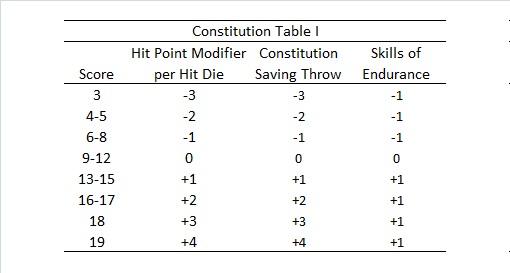 Straightforward again. Constitution Table II remains by the book. For now, I am going to retain the listing for "Survive Resurrection" as my choice of having no Raise Dead spell could change in the future. I might end up removing the actual Raise Dead spell while retaining Resurrection.

Some tweaks here. First off, I decided to throw in the chance for an additional 1st level spell per day for Magic-Users. Note, the bonus spell is not cumulative, it's a flat 1 extra spell from 13 to 18 Int, with the 2nd extra spell only coming if an affect raises Int above 18. Mostly, this change is to help along first level Magic-Users and to alleviate their boredom after blowing their load after the first spell. If this becomes unbalancing in play, it can be revised.

Notice that the maximum and minimum spells per level have been removed. Learning spells will be handled slightly differently. A failed check to learn a spell no longer precludes a Magic-User from ever learning that spell. Instead, the medium of the inscribed spell is destroyed, but the MU can try again if he finds another copy.

Intelligence Table I is by the book. 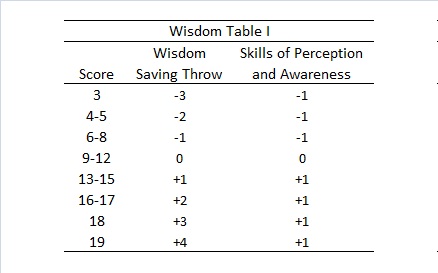 Nothing new to see here. Wisdom Table II by the book.

The Charisma table has a number of changes. I am going to cover this stat in more detail in its own post. The major difference, at a glance, is the opportunity to have additional dice to roll for starting money and the "inheritance" listing is a working name for the number of times that a player can roll on a list of special items  when generating a character. The changes are ultimately working towards making Charisma less of a dump stat, with the mechanics supporting short term benefits. Long term benefits will be covered in the following Charisma post.