Laying The Founation For Combat, or, Math Is Hard

Through most of my time as a DM during my teenage years, I typically did most of the math at the table. That includes most of the players as well. I am just good at mental math and adding and subtracting the small numbers that D&D uses are really not an issue for me. And this was 2nd edition, so there was plenty of fun math to go around. So after a bunch of dice were thrown, I could tell you if you hit, how much damage was dealt, and what the remaining hit points were before most people added up all the pips on the dice showing on the table. I'm not trying to brag here, but it just points out an area of playing D&D that could be improved. Delta goes into the how's and why's of easier mental math and how to apply it to D&D and combat.

So it is straight addition and it works with descending AC.

Fighting ability will be a catch all akin to 3E's base attack bonus. It will be used in to-hit rolls and play a part in other areas to measure how good a class is at fighting. Fighting ability will be a (mostly) straight conversion of the usual to-hit tables and THAC0 implementations so there will be no net change in how the classes play in combat. 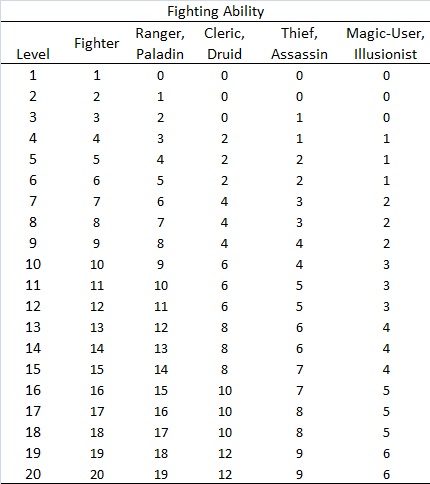 The main reasons for this change are to make the math a little easier and to establish a fighting statistic for characters that will be used in subsequent combat rules.