I talked about charges and shock tactics before, so let's try to incorporate them into our rules. The main goal here is to provide another combat mechanic focusing on shock tactics, or attacks to morale. Normal combat focuses on fire tactics, that is, killing an opponent. This would also be more widely referred to as attrition warfare or the wearing down of an opponent's men and materials.

Charges take the place of a standard melee attack for both the attacker and defender. The attacker must be mounted and requires open ground equivalent to a full round of movement to initiate a charge.

Charges are attacks on morale; morale values range from 2 to 12 and are checked with a roll of 2D6. Monsters' morale is given in their manual entries. NPCs within a party would have morale values as dictated by their commander's Charisma.

Any combatant defending against a charge with a Pike weapon receives a +2 to morale. Affects on morale, such as by a Bless spell, apply to morale for purposes of resolving charges.

Combatants check morale as a group, once for attackers and once for defenders. A successful check must be equal to or less than the morale value. Reference the results of the check against the following matrix: 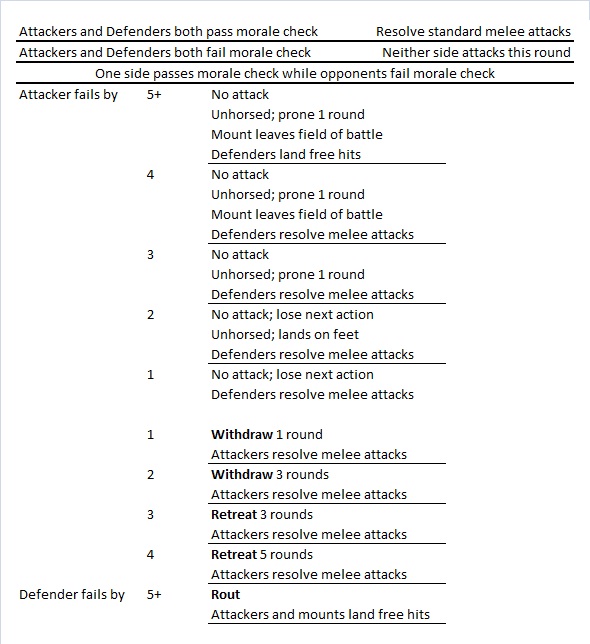 This table does require some extensive explanation.

When one side fails as the other succeeds, then one side has lost morale. In this case, the side that fails its morale check compares the amount if failed by against the matrix. For example, assuming the defender passed their morale check, an attacker with a morale of 7 who fails with a roll of 8 checks the "Attacker fails by 1" entry. A defender with a morale of 9 who rolls a 12 checks the "Defender fails by 3" entry.

Free hits. A free hit allows for a damage roll as if a normal attack succeeded. This only occurs once on the same round as the charge.

Resolve melee attacks. Roll a standard attack. This only occurs once on the same round as the charge.

Prone. Prone combatants are attacked at a +4 bonus and may not apply Dexterity bonuses to their AC.

Withdraw. Defenders move away from field of battle at normal speed as a coherent unit. They may not attack, but defend themselves as normal; pursuing attackers make normal attack rolls. Defenders who withdraw may elect to move at full speed if desired. Defenders that cannot Withdraw due to being cornered or surrounded may elect to surrender, else, they suffer the above effects without having to take their movement.

Retreat. Defenders move from field of battle at maximum speed with little cohesion. They may not attack and any attacks against them receive a +2 bonus. At the end of a retreat, defenders may attempt another morale check to rally and act as normal, otherwise, they seek to Withdraw until contact is broken. Defenders that cannot Retreat due to being cornered or surrounded will surrender.

Rout. Defenders move from field of battle at maximum speed and scatter in all directions. They may not attack and any attacks against them receive a +4 bonus. At the end of a rout, defenders may attempt another morale check to rally. On success, they may only return to combat after a full day's rest. On failure, defenders will try to desert. Defenders that cannot Rout due to being cornered or surrounded will surrender.

A defender who fails their morale check will suffer a standard attack on the same round as the charge occurs; this attack automatically hits during a Rout. On subsequent rounds, any pursuer who can maintain contact can continue to make attacks with any applicable bonuses.

An attacker who fails their morale check will suffer a standard attack on the same round as the charge occurs; this attack automatically hits on a morale failure of 5 or more points. Attackers lose their action on the next round. Prone attackers spend this lost action by standing up again. Mounts may be recovered if they have not left the field of battle.

Since this post is already so very long, I will add some commentary and discussion in the next post and/or in the comment section to answer questions.