I just finished reading SC Gwynne's Empire of the Summer Moon. It is an excellent historical narrative of the Comanches that I would recommend to those people whom enjoy such things. While the time period and subject matter are far away from the EMP, it still gives me plenty of ideas to work with.

Goblins in the EMP are a former forest dwelling people who now live on the fringes of the Empire and in the Polish-Lithuania Commonwealth, scraping out a living as best as they can. Goblins subsist on a combination of limited agriculture, basic animal husbandry, and raiding. Some goblin settlements have had success settling into an agrarian lifestyle in out of the way areas of the Commonwealth and have been able to avoid the ire of humans for the most part. However, many tribes look to raiding as a means of life as they strike into the Empire and the Commonwealth alike.

Goblins value indirect warfare to preserve their strength. They avoid decisive battles and seek to engage enemies far from goblin settlements. Their typical enemies come in the form of punitive raids. If their settlements are threatened, their warriors fight a screening engagement to allow their villages time to escape. Therefore, their preferred method of fighting looks something like the following. 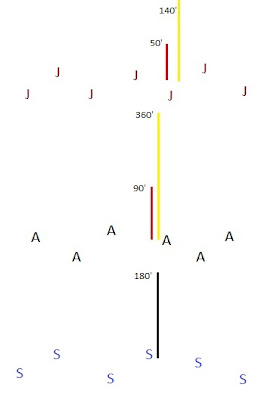 Essentially, the javelin line discharges its ranged weapon and then falls back. Foes pursue into the next line of fire after which the archers fall back. The spearmen are there as a delaying force to allow the other two lines to reform as above to repeat the formation. The spearmen will sacrifice their shields and minimize their engagement time just long enough to create the needed separation, then they too fall back.

Overall, the goblins seek to engage solely in ranged fire and in a running battle. Being unarmored, they can outrun any armored foe and eventually force their pursuers to break off in the face of constant harassment. If enemy skirmishers continue to keep pace, the goblins will eventually separate the opposing skirmish forces from heavier troops and may use the opportunity to engage in a standing fight if it is to their favor. These tactics are used in rugged and forested terrain to avoid being run down by cavalry. Goblin raiders will disperse in every direction if their lines or tactics fail.

After a successful encounter, the goblins will repeat this tactic day after day attempting to both wear down their foes and to lead them father away from their settlements. The goblins' primary goals are to protect their settlements and preserve their fighting strength.