Similar to the previous post on melee weapons, here's a chart of thrown weapons' statistics. 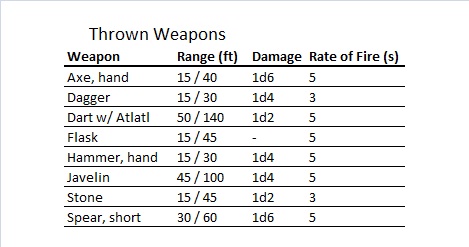 Note that there is no listing for Traits here, thrown weapons do not benefit from them. The Rate of Fire is the best case limit on how fast these weapons may be thrown. It assumes that the ammunition is on hand and readily accessible, such as a number of javelins stuck in the ground at the side of the thrower. Otherwise, the rate of fire would be dictated by how fast the thrower could grab more ammunition.

Range has two values. The first entry is the distance at which a weapon may be thrown with no penalty to hit; anything beyond that has a -5 to hit. The second value is the maximum range a weapon may be thrown. Another way to think of these ranges is that the first number is the optimal distance for man-to-man combat where accuracy is needed and the second would be for mass combat or indirect fire where accuracy is not as important.

The ranges are a simplification of real world values and are a combination of actual range and effective range for dealing significant injury. Sure, you can throw a dagger more than 30 feet, but that range reflects a combination of difficulty hitting the target square AND with the right blade orientation.

Next up, ranged weapons.